SAR or radar missions are known for their all weather and night time viewing capabilities. NovaSAR-S will provide affordable medium resolution imagery (6-30m) at a price similar to traditional optical missions, ideal for many applications, including ship detection and oil spill monitoring.

Based on the expertise of STTL on advanced small satellite platforms (DMC) and the payload sikills of Astrium UK, the SAR remote sensing service is developed at about 20-25 percent of the cost of more traditional systems. The result is a 3m-by-1m spacecraft, weighing only 400 kg. A new energy storage technology in space will be tested, which must make radar operations on small spacecraft possible. While SAR satellite missions have always followed a more performance driven approach, NovaSAR-S is following an applications driven approach. Focused on medium resolution imagery, NovaSAR-S enables solutions for low-cost applications, opening up the use of EO SAR data for a wider user community.

The innovative S-SAR payload is primarly targeting maritime surveillance applications. But a number of viewing modes must enable it to address different applications like flood monitoring, disaster mapping, monitoring forest deforestaion. Particularly in case of floodings or monitoring tropical deforestation, the cloud penetrating capabilities of the SAR instrument comes in very handy.

Next to the SAR payload, the NovaSAR-S mission will also have a AIS (Automatic Identification System) payload on board. This makes NovaSAR the first satellite to provide direct visual ship detection imagery simutaneously with AIS ship tracking data. The combination of radar imagery and AIS signals turns NovaSAR-S data into a tool for identification and tracking of vessels, and opens the door for applications related to security, smuggling, piracy and oil spilling. But there is more. NovaSAR imagery will also be used for environmental monitoring like ice cover and iceberg monitoring, pollution and bathymetry.

NovaSAR, has won an Innovation award for Navigation and Surveillance Communications from The Institution of Engineering and Technology (IET). The launch of NovaSAR is planned for 2015. 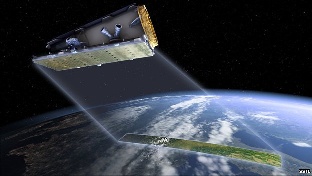 (a) Artistic impression of NovaSAR-S in action

(b) Oil refinery: RnD work saw the technology flown on the underside of a plane

The applications driven approach of the NovaSAR-S development and the unique combination of satellite AIS with SAR viewing compatibility broadens the potential SAR applications for a wider user community.

NovaSAR-S will provide at least 1 million km² per day of cloud-free data with guaranteed time-to-target observation capability, at an affordable price. The night time all weather viewing capability in combination with the flexible imaging modes can strengthen the operational use of SAR data for a wide range of applications. The ScanSAR modes for example, will detect oil spill in coastal areas and open ocean.

The satellite is particularly suitable for rapid and large scale flood assessment when optical satellites are limited due to cloud cover. Flooded areas are easily detected by S-band SAR and can be highlighted on standard maps using change detection techniques. It provides rapid response imagery to support disaster relief planning and operations as well as damage assessment. Large areas of ice formation in polar latitudes can be monitored by NovaSAR-S as well, especially where there are long periods of darkness during the winter months. Combining SAR and AIS data will provide additional information for shipping, fishing and customs authorities.

For those looking to invest in their own satellite, NovaSAR-S is available for independent ownership and control. The NovaSAR-S platform can be supplied as a spacecraft or as part of a complete mission solution. Direct in orbit tasking and encrypted data downlink provides rapid surveys of major natural disasters.

NovaSAR-S is the small satellite approach to SAR, designed for low cost operations. SSTL’s tried and tested approach in delivering small satellite missions is combined with SAR expertise at Astrium UK to develop a highly flexible system that can support end-to-end solutions for numerous applications.

There is a similarity with missions like DMC (Disaster Monitoring Constellation), which proved that a small-satellite approach works for medium-EO resolution applicatons. NovaSAR-S is the first to transfer this concept to SAR missions.

The NovaSAR-S approach has been to design a baseline mission which answers the question "what imaging performance can we achieve with a spacecraft that can be built and operated at low cost, and is compatible with low cost launches?" This approach leverages heavily SSTL's experience of low cost optical EO missions and Astrium's experience of SAR missions.

The NovaSAR-S spacecraft combines heritage avionics (of the SSTL-300 bus) with a new structural design so it is able to carry a payload. The design lifetime of the satellite is 7 years. The orbital altitude is 580 km. A new energy storage technology in space will be tested, by providing a high-power energy source for relatively short operating times.

The innovative S-SAR payload is being developed collaboratively by EADS Astrium of Portsmouth, UK, and SSTL, the payload activities are led by Astrium UK. The sensor has 4 viewing modes

AIS is a secondary load on the NovaSAR-S mission. 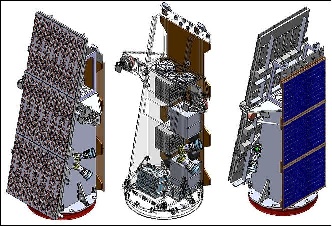 The NovaSAR-S satellite carries technical innovations in the way the spacecraft is build, its energy storage technology and the sensor equipment.

Avionics: NovaSAR-S features the same avionics as those on the on the SSTL-300 bus of NigeriaSat-2.

The NovaSAR-S spacecraft has a mass of ~400 kg, a xenon propulsion system, and a design life of 7 years.

SSTL is developing a prototype of a super-capacitor based power system, including a capacitor charge regulator (with maximum peak power tracking and control charging), a cell monitoring and management module (to monitor and protect each cell), and capacitor-bank (energy storage module). A COTS LIC (Lithium-Ion Capacitor) is employed in the capacitor-bank. The LIC uses activated carbon as a positive electrode that makes an electric double layer, and has lithium-ions pre-doped into a carbonaceous negative electrode.

The S-band antenna is a micro-strip patch phased array of ~ 3 m x 1 m in size. The antenna size drives the satellite size which has been deliberately constrained to meet low cost launch vehicle requirements. 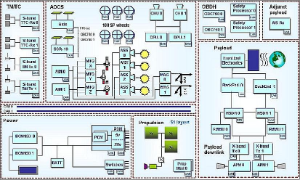