Some of the HABs are known as ‘red tides’ because of the water being coloured red by numerous concentrated red algae, but HABs can have different colours. However, not all HABs have optical signatures detectable by remote sensors and many HABs occur deeper down in the water column. In addition cloud cover may interrupt remote sensing. But despite these limitations remote sensing is very valuable because it provides rapid detection of increases of chlorophyll-a over large areas in a small period of time.

One of the criteria used for assessing water quality, is the concentration of phytoplankton distributed in the water. While naturally occurring phytoplankton are common in coastal waters, increasing eutrophication and sea surface temperatures (SSTs) cause these microscopic algae to bloom. Apart from oxygen depletion caused by the massive death and decomposition of algae, a small percentage of algae produce biotoxins, posing a great threat to nature and public health by contaminating the water, sediments and aquatic organisms.

Long-term regional, national and international monitoring plans and programmes provide information about trends and frequencies of these so called ‘harmful algal blooms’ (HABs), their resulting toxicity for marine life, and suspected causes (e.g., climatological, hydrographical, or nutrient changes). To monitor HAB species occurrence and HAB toxins it is recommended to combine in-situ measurements with remote sensing. The dramatic increase of phytoplankton biomass causes the HABs to have distinct spectral characteristics. In particular, chlorophyll-a, a coloured pigment found in phytoplankton, is detectable by satellites, at least for HABs occurring in surface waters. 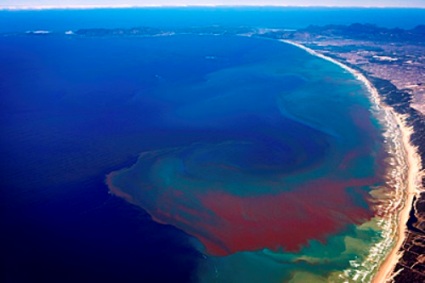 At present there are a number of institutions involved in the detection of HABs. The Chlorophyll Ocean Globally Integrated Network (ChlorOGIN) project, sponsored by GOOS (Global Ocean Observing System), GEO (Group on Earth Observations), IOCCG (International Ocean Colour Co-ordinating Group), PML (Plymouth Marine Laboratory) and POGO (Partnership for Observations of the Global Ocean), promotes in- situ measurement of chlorophyll in combination with satellite derived estimates.  In the framework of the European Global Global Monitoring for Environment and Security (GMES) initiative, the MarCoast and Aquamar projects aim to improve existing (H)AB detection services by developing satellite measurements which give better and more information regarding different species and the level of harmfulness.

Figure showing the evolution of the  Karenia mikimotoi bloom from July 15th to July 29th 2010. Clearly visible is the easterly drift of the bloom which may have been caused by either the mean residual current or by favourable conditions in the east. After July 21st SSTs were declining, causing the bloom to decay as visible in the image of July 29th 2010. Credit: CERSAT/MarCoast.

As the Iceland’s eruptions of Eyjafjallajökull in April 2010 and Grímsvötn in May 2011 demonstrated, volcanic outbursts can have a huge impact world wide. Air traffic had been temporarily suspended throughout Europe, affecting economic, political and social activities globally.

Under the Global Monitoring for Environment and Security (GMES) programme, a new constellation of satellites called the Sentinels is being developed that will provide a wealth of new satellite data and products that better meet for the assessment and management of geo-hazard risks. Sentinel-1 will be a key source for systematic terrain deformation monitoring, while Sentinel-2 will provide high-resolution multispectral imagery to support hazard management. Sentinel-3 will render high temporal thermal-infrared imagery to support lava flow monitoring.