GAF has developed and successfully demonstrated a new innovative approach for deriving bathymetry from space. With this method, GAF can generate bathymetric maps covering large areas by simultaneously using differential spectral attenuation and stereo-information from satellite imagery. This method has recently been used, for example, to successfully map a large area in the Caspian Sea. The results provide the company RWE Dea Azerbaijan with valuable information suitable for hydrocarbon exploration and for the performance of seismic surveys.

The approach only requires the use of satellite stereo imagery with precise ephemeris data and is therefore not dependent on ground truth data like echo sounding or lidar depth measurements. As such time consuming and costly in-situ measurements are not required, the technique is more flexible and cost-effective than traditional approaches.

Bathymetry is the underwater topography of lakes or ocean floors and constitutes an important information layer on hydrographic charts. Traditional ways of acquiring bathymetry data include the carrying out of depth measurements using sounding lines, sonar or lidar. However, as ship-based or airborne measurements take time to prepare and perform and can only cover fairly small geographic areas in a single pass, quite significant expenditure is usually required in terms of time and money. Bathymetric information is of importance in offshore hydrocarbon exploration: knowledge of the seabed morphology and of subtle submarine features, such as so-called mud volcanoes, can provide valuable indicators to prospectors. Furthermore, accurate sea-bottom morphology facilitates the correct interpretation of 3D seismic surveys.

RWE Dea Azerbaijan tasked GAF with the performance of a bathymetric survey in its area of interest in the Caspian Sea. GAF made use of satellite remote sensing and its new stereo approach for this task and mapped an area of 230 sqkm. The bathymetric analysis was based on a stereo pair of very high resolution multispectral satellite images. 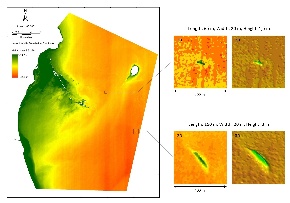 Dr. Christian Bücker, Manager of Research and Development at RWE Dea, states: "The satellite-derived bathymetry provides valuable information for our area of interest in the Caspian sea. The bathymetric analysis was performed successfully and has sufficient accuracy to detect and map mud volcanoes. The existing sparse bathymetry knowledge of the areas has thus been greatly improved."

First, stereoscopic measurements were performed, which provided depth information about clearly recognisable submerged features and topography. In a second step, a bathymetric model was created using these features and the satellite imagery, in order to provide area-wide bathymetric mapping of depths and seabed morphology. The bathymetric information was collected in a regular grid with a spatial resolution of 4m and had an absolute vertical accuracy better than 2m. The modelling approach utilises the spectral absorption of light in the water column, which is dependent on the water depth. The method is based on the amount of light penetration into the water column, which under favourable circumstances can reach depths of up to 20m. It should be noted, however, that strong sun glint, and dense accumulations of microorganisms, vegetation or suspended load can hamper the application of the method.